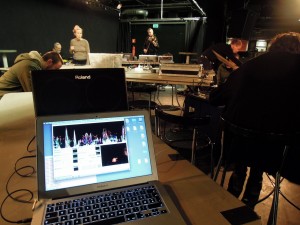 Yesterday, I performed with the Norwegian Noise Orchestra at Betong in Oslo, at a concert organised by Dans for Voksne. The orchestra is an ad-hoc group of noisy improvisers, and I immediately felt at home. The performance lasted for 12 hours, from noon to midnight, and I performed for two hours in the afternoon.

For the performance I used my Soniperforma patch based on the sonifyer technique and the Jamoma module I developed a couple of years ago (jmod.sonifyer~). The technique is based on creating a motion image from the live camera input (the webcam of my laptop in this case), and use this to draw a motiongram over time, which again is converted to sound through an “inverse FFT” process.

In the performance I experimented with how different types of video filters and effects influenced the sonic output. The end result was, in fact, quite noisy, as it should be at a noise performance.

To document my contribution, I have made a quick and dirty edit of some of the video recordings I did during the performance. Unfortunately, the audio recording of the cameras used does not do justice to the excellent noise in the venue, but it gives an impression of what was going on.