Yesterday Miles Phillips{.url} suggested that the word “motionlessness” may be what I am after when it comes to describing the act of standing still. He further pointed me to a web site with a list of the world records for motionlessness. The rules to compete in motionlessness is as follows:

But from my point of view, being interested in micromovements, I would be very curious to see how still these record holders actually were.

At the ArtsIT conference next month I will present the results of a study on standstill that I have conducted together with Kari Anne Bjerkestrand. I have given a sneak peek of the data earlier, and below is another figure with plots of motion capture data from the study. The plots show data of a marker placed on the neck, from six different 10-minute long standstill recordings of myself and Kari Anne. It is only the vertical position of the marker that is plotted. 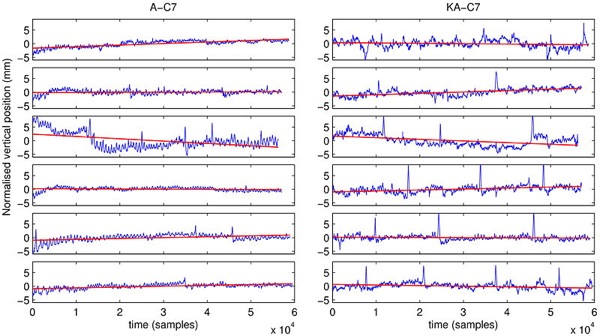 From the plots we can see that the running marker displacement was at the scale of only a few millimeters, with a maximum displacement of less than 10mm. It can be argued that this is not much, but it certainly is not absolutely still.

One thing is the quantitative data, another is our subjective experience of standing still. Even though we tried our best to stand physically still, we could easily notice how we were swaying back and forth, doing postural adjustments, etc. Observing the video recordings of ourselves afterwards, it is also possible to see these micromovements through visual inspection only.

Based on these findings, I would be very curious to see how still a person can actually stand, not only measured in hours and minutes, but also in millimeters. So to any aspiring world record breakers: please come and do your next attempt in our lab!