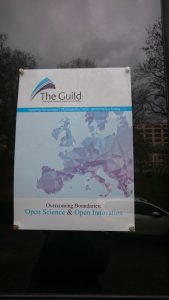 I participated in the opening of the Guild of Research Universities in Brussels yesterday. The Guild is

a transformative network of research-led universities from across the European continent, formed to strengthen the voice of universities in Europe, and to lead the way through new forms of collaboration in research, innovation and education.

The topic of the opening symposium is that of Open Innovation, a hot topic these days, and something that the European Commission is putting a lot of pressure on. I was invited to present an example of how open research can lead to innovation and to participate in a panel discussion. Below is an image of the setting, in the lovely Solvay Library in the heart of Brussels (and great to see that the 360-degree plugin works in WordPress!):

In the symposium I showed a shortened version of the TV documentary that tells the unlikely story of how my basic music research has led to medical innovation. In 2005 I developed a method for visualizing the movements of dancers - motiongrams - with a set of accompanying software tools. As an open source advocate, I made these software tools freely available online, and witnessed how my code was picked up by artists, designers, hackers and researchers. Now my method is at the core of the system Computer-based Infant Movement Assessment (CIMA). This is a clinical system currently being tested in hospitals around the world, with the aim of detecting early-born infants’ risk of developing cerebral palsy.

The panel discussion centered mainly on policy, and it was great to see that both European university leaders and the Commission embrace openness in all its entirety. Head of Cabinet Antonio Vicente effectively argued that Europe started late, but is quickly catching up in pushing for openness (access, data, research, innovation). The question is now how we get to do this.

I think that the EU should get a lot of credit for their brave move within open research, but individual universities need to push for the same type of openness throughout their institutions. Perhaps the biggest challenge is to change the mentality of peers, who ultimately are the key persons in making decisions as to who should get project funding, appointments and promotions. I see that we often fail in recruiting young researchers with an inclination towards open research. Such applicants consistently get evaluated as “weaker” in comparison with researchers that are following more traditional academic pathways.

Moving forwards, we need to continue with an (inter)national push, but we should not forget about the need for a culture change among individuals. This is something we need to work on at an institutional level.