Today the Norwegian government decided on the following standards to be used in all public communication:

It is great to see that they encourage to use (mainly) open formats and standards. Now it will be interesting to see how long it takes before these standards are actually widely used. Asking Google for help, I see that it will probably take some time before the University of Oslo is following the new guidelines:

And the government seems to have a few files to convert themselves:

The last few weeks have been quite busy here in Oslo. We opened the new lab just about a month ago, and since then I have organised several workshops, guest lectures and concerts both at UiO and at NMH. I was planning to post some longer descriptions of what has been going on, but decided to go for a summary instead.

First we had a workshop called embedded systems workshop, but which I retroactively have renamed RaPMIC workshop (Rapid Prototyping of Music Instruments and Controllers). Dan Overholt came up from Denmark with a bunch of CUIs and some pendaphonics. We spent time looking at various solutions for musical electronics, trying to solve bluetooth and virtual com port problems, etc. There are some pictures up on flickr, and a bunch of links to various interesting things are posted on the wiki.

Second, we had an OLO workshop at the Music Academy with Dan Trueman from Princeton University. During the last year we have had a few workshops and some concerts with various constellations of the Oslo Laptop Orchestra (OLO). We had already been playing some of the PLOrk repertoire on our own, so it was great to have Dan to help solve technical problems (particularly the automagic multicasting), as well as showing various conducting techniques. There are some photos on flickr, and a video coming as soon as I find some time to edit it. 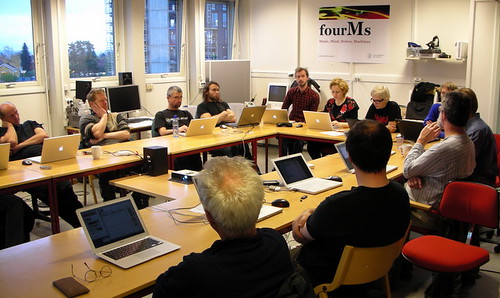 Finally, we had a Jamoma workshop. The first day was a public workshop introducing Jamoma to beginnning and intermediary users. The rest of the week was a developer workshop where we fixed a number of issues that have been plaguing the current 0.5 beta release, as well as laying the grounds for future development towards Jamoma 0.6. (flickr)

It has been great to get started doing various things in the lab. The new space has proven excellent for our activities, and it has been great that lots of people from outside of the group has also found the way to the lab. I am also happy that all of the activities have been based on collaboration between the university, the music academy and NOTAM.

A couple of weeks ago we had an excursion to an anechoic chamber in the basement of the physics department at the University of Oslo. This room is a remainder from back when there was an acoustics group in Oslo (which later moved to Trondheim), and it was a pure coincidence that we discovered that the old room is still intact, largely thanks to Arnt Inge Vistnes. He also happens to be the person that first introduced me to the Fourier transform back in the days when I studied physics, so he got the challenge of holding a guest lecture for our students in sound theory on the topic of (…) the Fourier transform.

To help spread information about various things related to music technology at the University of Oslo (and around), I have started the blog Musikkteknologi @ UiO (in Norwegian). It may be of interest also to people outside of UiO.

I am happy to announce that my dissertation entitled “ACTION — SOUND: Developing Methods and Tools to Study Music-Related Body Movement” has been accepted for public disputation for the degree Philosopiae Doctor (Ph.D.) at the University of Oslo:

The dissertation will be available to download from this website in a couple of weeks, and a couple of weeks before the disputation you may also get hold of one of the printed copies (for free) from the administration office of the department.