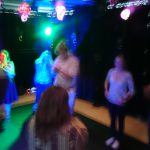 I am happy to announce the publication of a follow-up study to our former paper on group dancing to EDM, and a technical paper on motion capture of groups of people. In this new study we successfully managed to track groups of 9-10 people dancing in a semi-ecological setup in our motion capture lab. We also found a lot of interesting things when it came to how people synchronize to both the music and each other.

The present study investigates how people move and relate to each other – and to the dance music – in a club-like setting created within a motion capture laboratory. Three groups of participants (29 in total) each danced to a 10-minute-long DJ mix consisting of four tracks of electronic dance music (EDM). Two of the EDM tracks had little structural development, while the two others included a typical “break routine” in the middle of the track, consisting of three distinct passages: (a) “breakdown”, (b) “build-up” and (c) “drop”. The motion capture data show similar bodily responses for all three groups in the break routines: a sudden decrease and increase in the general quantity of motion. More specifically, the participants demonstrated an improved level of interpersonal synchronization after the drop, particularly in their vertical movements. Furthermore, the participants’ activity increased and became more pronounced after the drop. This may suggest that the temporal removal and reintroduction of a clear rhythmic framework, as well as the use of intensifying sound features, have a profound effect on a group’s beat synchronization. Our results further suggest that the musical passages of EDM efficiently lead to the entrainment of a whole group, and that a break routine effectively “re-energizes” the dancing.