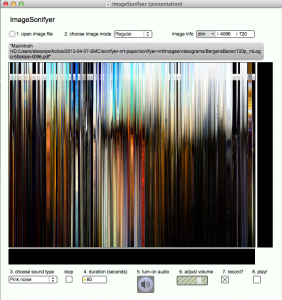 Earlier this year, before I started as head of department, I was working on a non-realtime implementation of my sonomotiongram technique (a sonomotiongram is a sonic display of motion from a video recording, created by sonifying a motiongram). Now I finally found some time to wrap it up and make it available as an OSX application called ImageSonifyer.  The Max patch is also available, for those that want to look at what is going on.

I am working on a paper that will describe everything in more detail, but the main point can hopefully be understood by looking at some of the videos I have posted in the sonomotiongram playlist on YouTube. In its most basic form, the ImageSonifyer will work more or less like Metasynth, sonifying an image. Here is a basic example showing how an image is sonified by being “played” from left to right.

But my main idea is to use motiongrams as the source material for the sonification. Here is a sonification of the high-speed guitar recordings I have written about earlier, first played at a rate of 10 seconds:

and then played at a rate of 1 second, which is about the original recording speed.