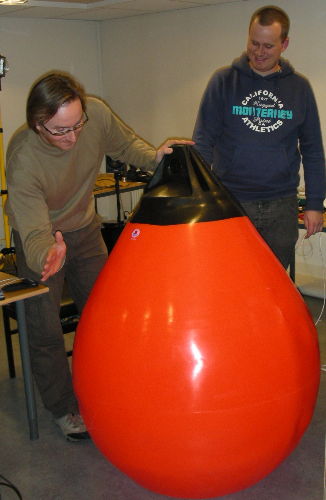 I have been preparing for Forskningstorget, an annual science fair in the city centre of Oslo, the last couple of days. Last year we made a Music Troll, and this year we are making a giant music ball for people to play with.

The ball is built from a huge boat buoy, 120 cm in diameter, made for tank boats and stormy weather. This makes it just perfect for a music installation which is supposed to survive some thousand children over the next couple of days…

As usual we have far too little time to work on this project, so the interaction design has been fairly quick and dirty, based on some sensors, sensor interfaces, and audio interfaces we had lying around:

The biggest challenge, however, has been to set up a Windows laptop for the project. I have some bad experience with using my own computers for such things, and I don’t want to put any of the lab computers out on the street on a rainy day, so I have borrowed a Windows laptop to use for the fair. Oh dear, now I wonder whether it hadn’t been worth risking a Mac instead… Besides all the general problems with Windows, annoying popup windows, updates, etc., I have spent several hours struggling to get the audio interface to work properly.

The Edirol FA-101 has always played flawlessly on all the Macs I’ve tried it on. No drivers, no problems. I have used this interface on Windows computers before, so I know it is possible. First I tested the 4-pin FW-connector on the laptop, had to install a couple of different drivers, restarted the computer and got a horrible buzz when I turned on audio in Max. Then I found a pcmcia FW-card lying around and installed that, tried a new audio driver, restarted the computer, and finally got some more decent sound out of the card. However, there are still some glitches appearing once in a while. I uninstalled the F-Secure anti-virus and things improved a little, but it is still not perfect. We’ll see if I end up with a Mac after all when we install it downtown tomorrow afternoon.