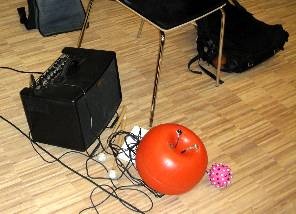 In between everything else I will be participating in the Open Form Workshop at the Music Academy this weekend. Christian Wolff, the last living of the “New York composers”, is visiting Oslo and we will be working with him during the workshop.

I have only had time to participate in some of the rehearsals so far, and it is very interesting. The pieces range from being very strict to very open leaving most things up to the performers. This fits me well, since I will be performing on a couple of music balls. So far I have only been using the acoustic part of the balls (with amplification) but I might hook up my laptop as well dependent on how much sounds I should make. The cool thing about performing acoustically, though, is to leave sonic space for everyone else, as most of my patches cover the whole spectrum. This has made me realise that I should probably make some setups where I have less, rather than more sounds.

Below is my part in a piece called Treatise. It is 8 minutes long, and we are currently seven people performing, everyone with a slightly different score but all of them rather minimalist. My take on this score is to keep a “drone” with one of the music balls built with the element of a dynamic microphone and steel wool. I am using the simple EQ on my amp to change the bass region according to the lower curve in the score. Then, in the end of the piece, there is this interesting new line appearing. It could be interpreted as just adding a little more to the texture, but I rather see it as a contrast to everything else, so I perform it with a quite different timbral quality. It will be very interesting to hear more about Wolff’s interpretation(s) when he comes tomorrow.